Elytra’s 2021 third quarter release is here and is ready for iOS and iPadOS 15.

This is the first release with a modern and cutting-edge foundation which focuses on reliability, stability and ease of adding new features in future releases.

If you feel generous and have a couple of minutes, please review the app on the App Store. It makes a huge difference for me. Thank you in advance.

Quick notes has been one of my favourite additions to iPadOS 15. You can quickly reference articles using it in your notes with a simple drag and drop.

The inclusion of prominent scene is a great addition to the multitasking arsenal on iPadOS. Simply pinch out from an article to open it inside its own prominent scene.

Extra large widgets on the iPadOS 15 makes getting a quick overview of recently fetched articles even easier. All widgets have been updated to support this new size.

Since the release of the Summer 2021 builds last week, I have released two additional patch versions for Elytra.

The builds are available on the App Store and on the dedicated Releases page.

Elytra v2.3 has just been released, you can read all about here.

I’m also excited to announce that Elytra is now also available on macOS as a Notarized app. You can head over here to download the latest release.

Going forward, I’ll be able to release more frequent fixes directly to the Notarized builds. These builds currently do not have any kind of crash reporter built-in. So if you encounter any crashing bugs, please do take a moment to send me the crash report.

I look forward to hearing from you about this, you can always reach out to me on twitter or email me at support@elytra.app. Happy Reading.

Elytra’s 2021 Summer Release is here, just in time for WWDC 2021. It’s been extra challenging to work on v2.3 as this is the first release of Elytra that introduced Swift into various core systems of the app.

If you have read my earlier post about the public beta, you’d know this has been in the works for a while, but the work on the new version started all the way back in February of 2020.

This is slightly bigger release (even I am not used to this) so this is going to need a TLDR.

Elytra v2.3 introduces a new system for finding and adding feeds to your lists. You can explore some pre-defined topics or search for topics of your interest by prefixing the keyword with a # key.

To directly explore feeds linked by a website, simply type in the website’s URL. If you have a feed URL, then you can directly use that.

Something that been asked for a long time is to directly add a feed to a folder when creating it. It’s now possible to do so and all your folders will be listed out. By default, None will be selected.

Syncing across all apps is now faster, more reliable and also automatically syncs in the background to keep all your devices in sync and ready to go. This lays a critical foundation for future releases.

The new sync system is written in Swift (version 5.4 for those who care) and is much more resilient, fault-tolerant and heavily tested compared to its previous iteration.

It also now uses a delta updates system so your devices only download the data they don’t already have. Multiple sync triggers can happen simultaneously on a single device of yours (say you added a feed, then marked all the items inside that feed as read which will trigger two events). This ensures your devices consume less power and consume less network bandwidth.

v2.3 brings two new Widgets: Folders and Bloccs. The Bloccs widget brings up to 6 of the latest unread articles from your feeds to your device’s homescreen, decorated by the articles’ cover images. The Folders’ widget enables to you select a folder of your choice and showcase up to 4 articles from that folder. I can’t wait to see how you have these setup on your devices.

I’ve spent all of March working through various modules in the app to optimise the performance. The Article Reader was the only component in the app that was optimised down to the last bit (to my best knowledge and technical capabilities). Everything else was just mish-mash. You should now notice improved performance in the app for just about any activity you’d perform in it.

Filters have been available in Elytra since v1.0 so it was always weird that there was no UI for it on macOS. Now there is, it’s mac-assed and works exactly as you’d expect it to.

I also took this opportunity to redesign the subscriptions interface. The new design is an indicator towards the next iteration of the design system for Elytra, it better and more clearly explains the advantages of each subscription type and enables you to quickly switch between the two offerings.

For a long time, I’ve used Elytra to notify me when new episodes are available for the podcasts I follow. In v2.3, I’ve built a mini-audio player into the app. It detects Podcast episodes and automatically updates its rendering state. This is in no way a replacement to a full-fledged Podcast app, but just a little something to get you a sneak-peak into that episode if you so desire.

I’ve made several improvements to the API and the apps to improve media playback. This fixes some Youtube videos not loading correctly. But most importantly, the apps now load, and enable playback of Movie trailers from the trailers.apple.com RSS Feeds.

The apps now feature global search enabling you to search for Feeds and Articles. You can also match for author names. In a future release, tokens will also be introduced to tokenise your search for a more precise hunt.

If you’re looking up an article and there are no feed suggestions for the app to provide, the app will suggest feeds from the articles it has found. So you can jump to the feed or the article.

To ensure the app is accessible by everyone, Elytra has always supported Dynamic Type, Voice Over and the various navigation accessibility features that macOS and iOS provides. In March, a customer got in touch with a complaint about the reader bar and a potential solution. We worked on that solution and I am now happy to let you know that the reader bar now comes in three sizes: Small, Regular (default) and Large. You can toggle the size from Settings > Misc.

PS: This setting has no effect if you’re using the toolbar.

Elytra is now available on the Mac App Store.

It’s finally happened. It took 3 years and I hope it was worth the wait.

Elytra for macOS brings the same native rendering performance you have come to know and love on iOS and iPad OS.

All of this has been possible because of Apple’s Mac Catalyst system which has been significantly improved on Big Sur, since its debut on macOS Catalina.

I’ll be sharing a deep-dive into the design decisions for Elytra, but for now, I hope you enjoy the release.

PS: A small update for iOS and iPadOS has also been released, so be sure to grab that from the App Store as well.

Version 2.1 brings a lot of stability and Quality of Life improvements to Elytra before the final Winter release of this year. This also brings the iOS App up to parity with its macOS app to be released soon.

This build also brings support the the newly released iPhone 12 lineup as well as the iPad Air 4th Gen.

Designed by the Braille Institute of America, and offered for free, Atkinson Hyperlegible is a great new font choice for greater visibility and legibility for low vision readers. Paired with an Accessibility focused app like Elytra, I hope this improves the reading experience for you.

You can read more about the Atkinson Hyperlegible font here.

Hot off the tracks of v2.0.2 comes v2.0.3 with a couple of more fixes. All known issues in Elytra’s v2 are now fixed and patched. If any additional issues are reported, those will be addressed in v2.1.0 unless they prevent the app from functioning.

Elytra’s first website was made in the fall of 2017. It was extremely basic, gave the requiste information to the reader and a link to sign up for the TestFlight beta ( TestFlight Links were not a thing back then).

With the release of v2.0, it was time to update it, however, with the rushed release of iOS 14, I didn’t get enough time to complete it.

Today, I just launched the updated website. Check it out here. 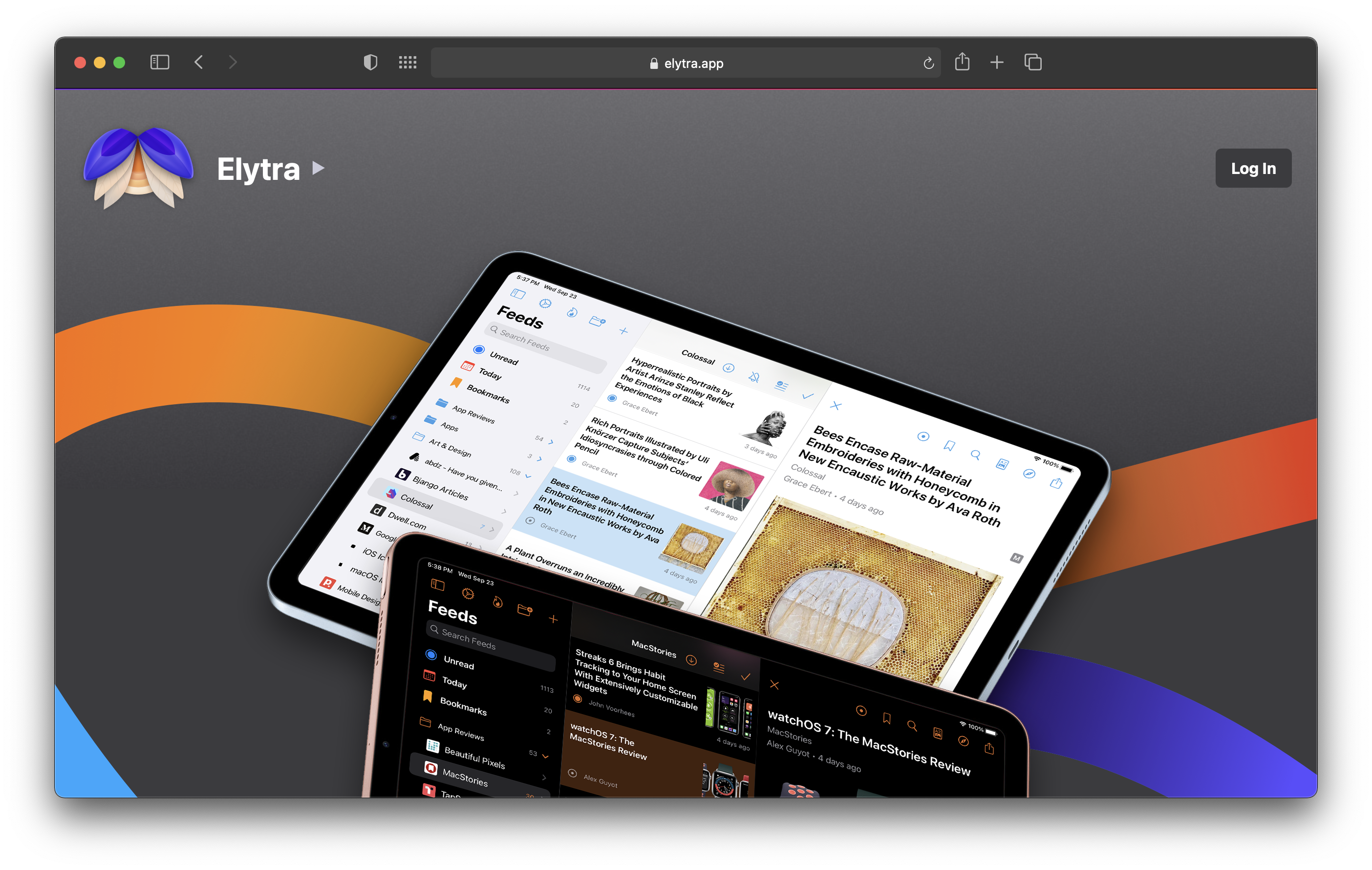 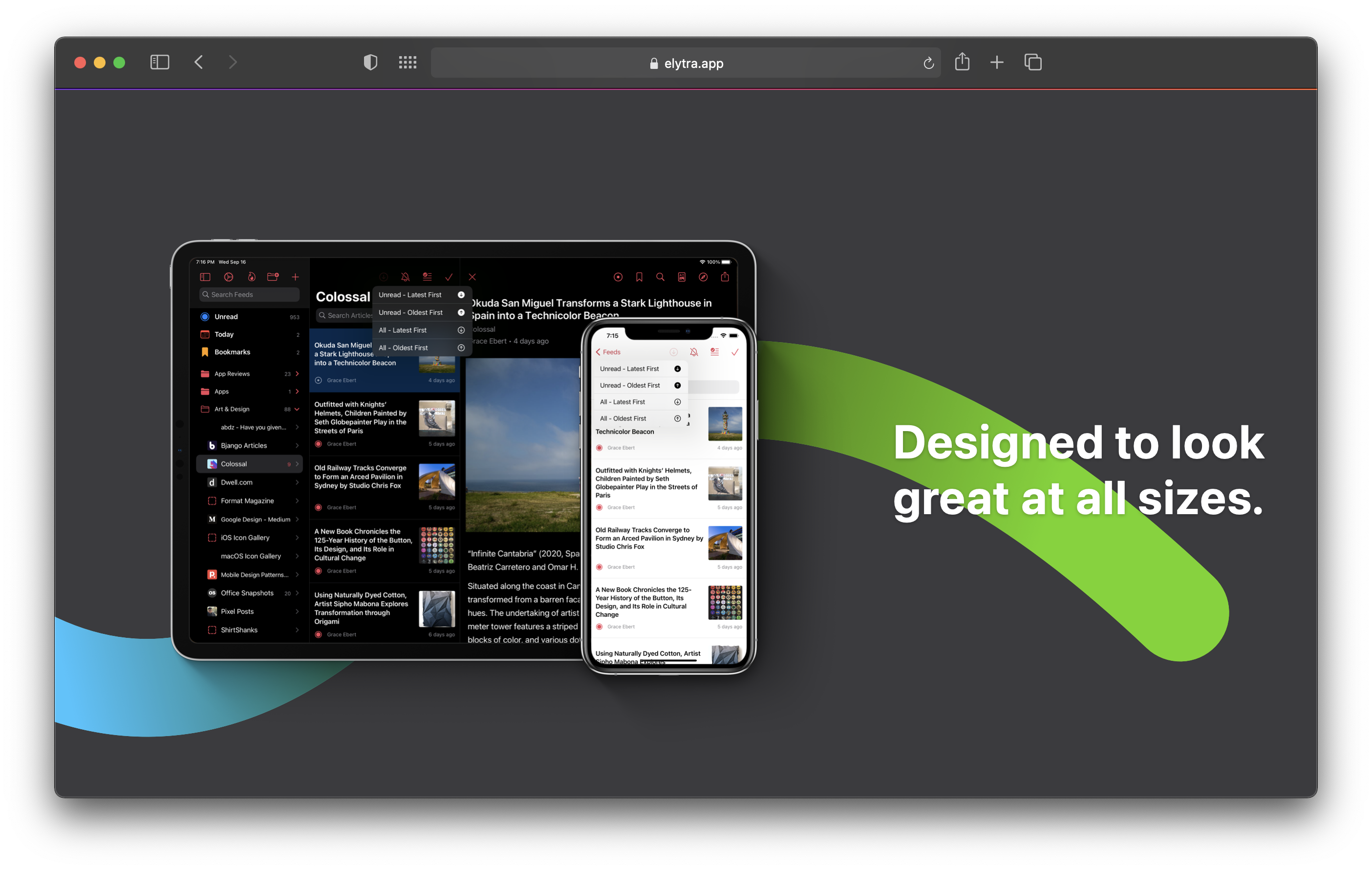 I have simplified the website by much, reduced as many interaction points as possible to ensure the reader can quickly get an idea of the app, and proceed to viewing further details on the App Store.

For the main navigation in the header, I used a simple <details> block with <nav> as its detail block. Accessible, simple, and known interaction.

Almost all images are optimised for retina screens as well as for various breakpoints at varying sizes.

One critical section I thought I must add was about Privacy. 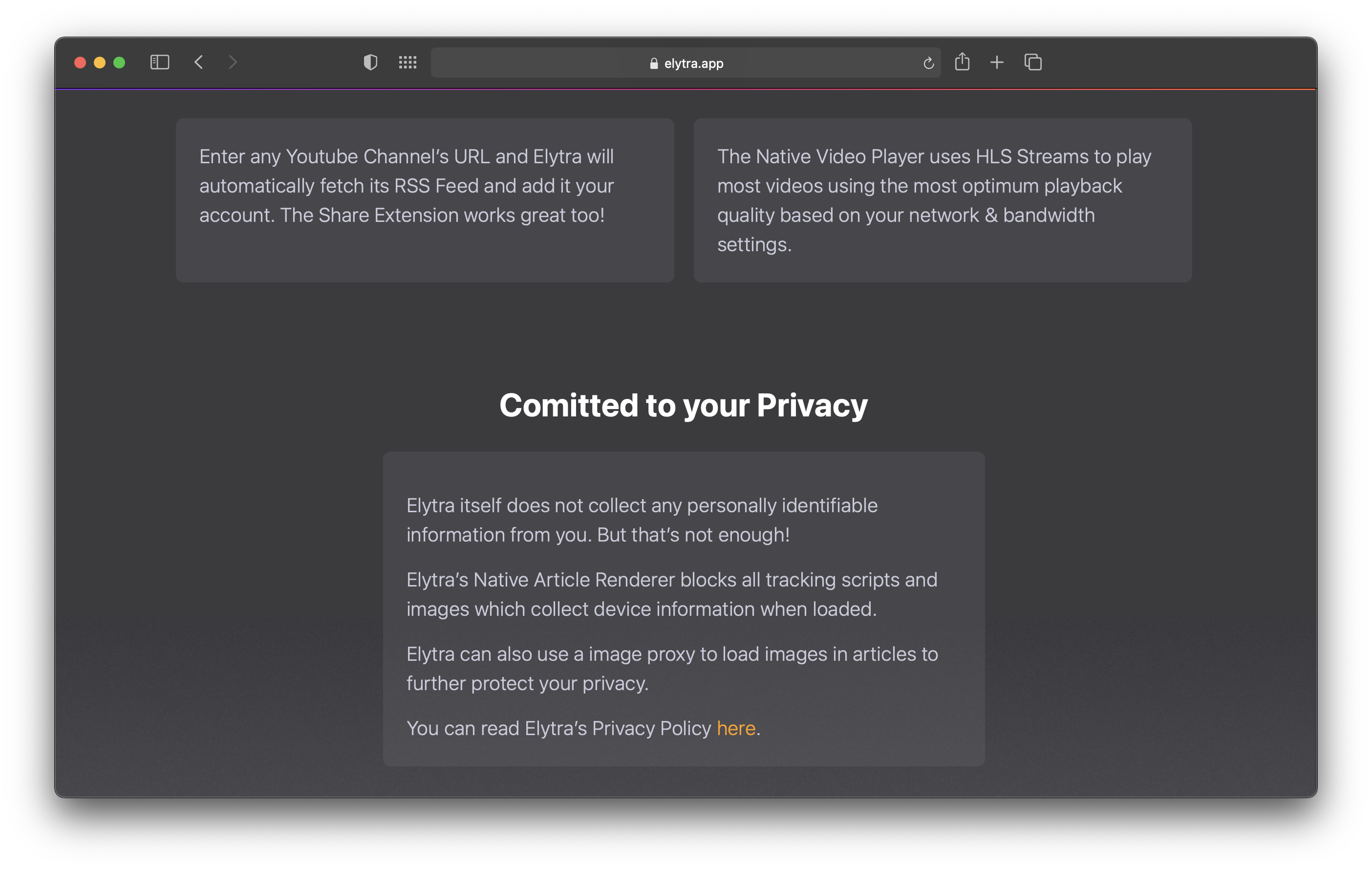 With Apple’s strong focus on Privacy, and a wonderful marketing page to go with it, I thought it would only compliment their message and my committment towards ensuring the same as a 3rd party developer on their platform.

Some additional enhancements I’d like to make sooner than later:

Dark/Light mode. The previous website support this, however, for this time around I decided to go with a static colour scheme to suite the various bands I am using on the page as decorative backgrounds for the device images.

If you have any suggestions for improvements or noticed a bug, do let me know.

Elytra 2.0.2 (38) is now available on the App Store. This build includes some critical fixes and an update is recommended.

Version 2.0.1 (31) should now be processing for the App Store and should become available shortly. I run into a small hiccup with the Review Process causing a small delay with the release.

This release mostly contains fixes for a few crashing bugs and it’s highly recommended, if you’re running iOS 14 now, that you update to this release.

There are some minor issues I am aware of. I’ll post another release next week to address those.

In the mean time, happy reading.